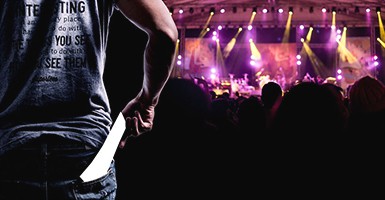 After comparing tickets prices at all of the major Vegas nightclubs, I was able to put together a complete list of prices from lowest to highest. To write this article, I analyzed ticket prices from over 200 different events, at 20 of the most popular Vegas clubs.

The average ticket price for a Vegas nightclub is between $20-$40 for women and between $30-$60 for men. Cover charges at some clubs are slightly higher or lower than this average. Ticket prices for any given night are dependent on a number of factors including: the DJ, the day of the week (weekend vs weekday) and whether or not it’s a holiday.

The prices in the charts below take all factors into account with the exception of holiday pricing. Tickets for holidays (like the 4th of July or New Years) cost much more, so I mention them later in this article.

The prices in the chart below are pre-sale prices. If you were to purchase a ticket at the door of the nightclub, in many cases you can expect to pay dramatically more. Also, notice that tickets for men typically cost more than tickets for women.

The DJ only effects the ticket price at some of these clubs. For example XS may charge $75 for a ticket to see the Chainsmokers, but only charge $35 for Dillon Francis. Then you have clubs like Jewel that charge $30 to see DJ Bamboozle, then the next night charge the same $30 to see a big name like Tyga. My point is, the price of the ticket doesn’t determine how good the show is. There are plenty of bargains at the cheaper clubs.

Most of the time tickets will fall into the price ranges above, but there are also some DJs that charge much more. Luckily, there are only a handful of DJs where this applies, they include: Calvin Harris, Rick Ross and Drake. You can expect to pay around $75-$100 to see one of them perform.

Get Into The Club For Free Without Tickets

If some of these prices sound a bit high don’t worry, all nightclub in Las Vegas offer free entry when you sign up for their guest list. That’s right, the same event that charges $50+ for a ticket, is offered for free. If this a new concept for you, then check out this post, where I explain what the guest list is and how to get on it.

The only time when guest lists are unavailable are during holidays (like the 4th of July) and for specific DJs. The DJs that don’t have guest lists available include: Calvin Harris, Rick Ross, 2 Chainz, Migos and Drake. With the exception of nights when one of the artist I just mentioned is performing, you can always get into the club for free on the guest list. You can sign up for both nightclub and dayclub guest lists for free online.

In addition to nightclub ticket prices, I also looked into the ticket prices for most of the major dayclubs and pool parties. You can see the results here:

The prices for pool parties are very similar to the prices for nightclubs. Typically you’re going to have to pay more to see the better DJs, but not always. There are dayclubs, like Lavo Brunch, that charge the same price for a ticket regardless of the DJ. Additionally, you can completely avoid having to pay for a ticket just by signing up guest list. Every pool party and dayclub in Las Vegas has their own guest list, which you can find here.

Holidays like New Years, Memorial Day, Labor Day, Halloween and the 4th of July are extremely busy in Las Vegas. Every nightclub is completely packed, giving the clubs no incentive to offer free guest lists. So, you’re only option during these holidays is to purchase a ticket.

As a general rule, you want to purchase your tickets for these events as soon as possible. Prices often rises, as the event gets closer. Clubs will even sell out of tickets for major holiday, further driving up prices. Each holiday is different and most clubs offer different tiers of tickets, like General Admission, VIP or VIP Plus, so it’s difficult to give you an exact price.

Expect ticket prices for major holidays to be about $100 per person. They may cost slightly more or slightly less depending on the club and what tier of ticket you purchase, but $100 is a good estimate of what you’ll be paying.

Pre-sale Vs Buying Tickets At The Door

Pre-sale tickets bought online though a club’s website are generally much cheaper than what you would be paying at the door. When you purchase a ticket at the door you run the risk of prices getting jacked up. As the club fills up over the course of the night, they start charging more for admission. A $40 cover charge at 11:00 pm will often double by 12:30 am. On busy nights I regularly see cover charges of over $100. All this can be avoided by either buying a ticket in advance or signing up for the guest list.

As I mentioned before, the best value can be gained by getting into the club for free on the guest list. Many clubs even offer promotions like free drink tickets or open bars to guests who come in on the guest list. But, if you’re set on buying tickets here are some pointers:

How much does bottle service cost at Vegas nightclubs? Las Vegas bottle service can cost anywhere from $350-$10,000+. There are many factors that effect cost of bottle service including: the number of people in your party, the club you attend, the DJ that’s playing and table location. You can compare bottle service prices for each Vegas club here.