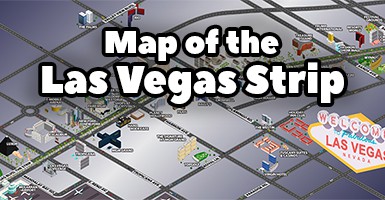 Navigating the Las Vegas Strip can be confusing, especially if it’s your first time visiting Sin City. So, I created a map to help you find your way around the Strip. Feel free to download and print it out below…

It’s important to note that the distance between each casino is greater than it appears. The Las Vegas Strip is over 4 miles long, and it takes OVER AN HOUR to walk end to end. You may want to save time by riding the Las Vegas Monorail. If you do plan on taking the monorail, check out the transit maps below.

All the major monorail stations are displayed on the map, so you can easily find them. Again, you’re free to download or print the map out. These resources were created to help people navigate the city more efficiently. Here are the stations featured on the map from north to south:

The monorail costs $5 for a 1-ride ticket or $13 for a 24-hour pass. There are also trams that run on the opposite side of the Strip. The trams operate on 3 separate circuits, so they don’t run all the way up the Strip. But they are completely free and offer a second transportation option. I’ll provide a map and list the circuits below:

(This map is interactive, so you can zoom in to get a closer look at all of the stops.)

If you plan on going deeper into the city, Las Vegas also offers a bus option. The Deuce is the most popular and economical bus in Las Vegas. You can purchase a 2-hour pass for $6, a 24-hour pass for $8, or 3-day pass for $20. I’ll include a map of the bus route down below.

If you’re unfamiliar with the Deuce Bus, then you’ll definitely want to check out the in-depth post I wrote here (you can download the Deuce Bus map on that page). In that post I also included an interactive map of the Downtown Loop Bus route. You’ll want to use that bus if you plan on visiting Downtown Las Vegas.

Many people prefer the casual atmosphere of Downtown Las Vegas to the glitz and glamour of the Strip. And I don’t blame them! The Strip can get overwhelming sometimes. Plus, the table minimums are much lower Downtown, making for a better gambling experience.

There are about a dozen major casinos in Downtown Las Vegas, most of them located on Fremont Street. I added all of them to the map down below. You can also download and print a larger version of the Downtown Las Vegas map here.

If you haven’t visited Downtown Las Vegas, I highly recommend you check it out. There are plenty of things to do in the area besides gambling. Plus, Downtown is much less expensive than the Strip. Most attractions cost less than $30. To see all the fun things that you could be doing in Downtown Las Vegas, check the blog post I put together here.

Can You Walk The Entire Las Vegas Strip?

When most people refer to “the Strip,” they are talking about the 4-mile stretch that extends from Mandalay Bay at the southern end, all the way to The Strat (formerly Stratosphere) at the northern end.

It takes about an hour and a half to walk the entire Strip end to end. In fact, I don’t recommend that you walk the entire length of the Strip. I would only walk as far north as the Wynn. The stretch between the Wynn and the Stat is pretty empty. It’s much easier to just take a cab (or Uber/Lyft) the rest of the way north. The monorail is an option too.

However, you can walk the lower part of the Strip. If you walk non-stop from Mandalay Bay (southern end) to the Wynn (northern end), it will take about 45 minutes. As I mentioned earlier, the casinos are further away than they appear. When looking at a map they seem deceptively close. Just keep that in mind.

These maps should help you find your way around town. However, knowing where everything is will only get you so far. If you don’t know what each resort has to offer, you’ll still be wasting a ton of time wondering around the city. It pays to know which casinos are worth visiting, and which ones are best avoided.

To help you avoid making the same mistakes I made my first time visiting Las Vegas, I put together several travel guides (linked below). Each one walks you through valuable time and money saving hacks. Hopefully they will help you get the most out of your Vegas vacation…