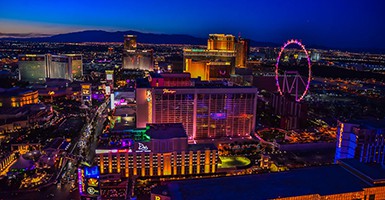 Hotels off the Las Vegas strip are best if you just plan on gambling. Off-strip casinos are often cheaper and have a lower house edge than the casinos on the strip. However, if you’re visiting Las Vegas for shows, attractions, restaurants and nightclubs, you’ll be better off staying on the strip.

For most, the convenience of being in the center of the action outweighs any cost savings gained from staying off of the strip. But depending on why you’re visiting Vegas, you can still make an off-strip hotel work. In this post, I’ll cover some of the pros and cons of staying off the strip to help decide where to stay.

Staying Off The Las Vegas Strip: Pros Vs Cons

The table minimums are often lower at off-strip casinos. But more importantly, the house edge is lower for all casinos games. If you plan on doing a lot of gambling, you’re more likely to win money if you do it at an off-strip casino.

The casinos in downtown Las Vegas have looser slots than the ones on the strip. If you head to the casinos on the Boulder Strip in Las Vegas, you’re odds of winning are even higher according to the UNLV Center For Gaming Research.

The same is true for the table games and sports book. Your best bet is to play at one of the casinos in downtown Las Vegas.

These charts show how much the casino keeps for every dollar gambled. For example, if you played a total of $100 worth of spins on a slot machine on the strip, the casino would come out ahead by $7.50.

So the higher the percentage, the more likely you are to lose money. The games section on the chart includes all table games (like poker, blackjack, roulette, craps, etc) and the sports book.

If you’re coming to Las Vegas to gamble, staying off the strip is a huge advantage. You’ll have more money to gamble because you’ll get a cheaper room, and you’re more likely to actually win.

The main issue with off-strip hotels is the lack of convenience. If you plan on making daily trips to the strip (and most people do) then the added cost of transportation may negate any benefits you gain from having a cheaper room.

Every time you take an cab (or Uber/Lyft) to the strip it will cost you about $15 each way. You can avoid cab fares by renting a car, but that will cost about $40 a day on average. Not only that, but you’ll lose time commuting back and forth between the strip and your hotel.

If you’re looking for the full Vegas experience, I highly recommend you stay on the strip. Hotels off of the strip lack the energy and buzz of the high-octane strip hotels. Off-strip hotels tend to have more locals, and the crowd tends to be older (although a more relaxed environment may be better for some people).

The full service hotels on the strip are also much more luxurious. They have better amenities and better service. Pretty much anything you could possible need is already in your hotel, or within walking distance at a nearby hotel.

The biggest reason why people want to stay off the strip is because the hotel rooms are cheaper. For the most part, that’s true. You can get better deals off of the strip. But how much cheaper are they? Let’s look at a few examples of typical nightly rates for off-strip hotels:

The Strat is technically on the strip, but it’s so far away from the other hotels that I consider it an off-strip hotel. Now let’s compare these prices to some average rates of mid-tier hotels on the strip:

As you can see, hotels off the strip are slightly cheaper. Although, there are a few affordable hotels directly on the strip, especially during the week (Sunday-Thursday).

If you don’t like paying resort fees, you’ll be happy to know that they are less common off the strip. I made a full list of hotels near the strip that don’t charge resort fees here. Staying at a hotel without resort fees can save you between $20-$40 a night.

If you’re on a really tight budget but still want to stay on the strip, you can save money in other areas. For example, you can get into most nightclubs and pool parties for free using the guest list. All nightclubs in Las Vegas have a guest list and it’s free to use. If you plan on going out, taking advantage of the guest list will save you a ton of money.

Eating at more budget friendly restaurants will help you save too. If you eat at the hotel buffet every meal you’ll easily end up spending upwards of $100 a day on food!

And, as I alluded to earlier, hotels in Las Vegas are much cheaper during the week (Sunday-Thursday). On weekdays hotels in the center of the strip, like the Flamingo or LINQ, cost pretty much the same as off-strip hotels like the Golden Nugget.

There are a ton of quality hotels found off of the Las Vegas strip. Many of these off-strip hotels are actually located within a block or two of Las Vegas Boulevard. This isn’t a full list, but here are some of my favorite off-strip hotels:

I added all of these hotels to the map below. You can see that most of them aren’t too far away from the strip:

Which off-strip hotel is the closest to the strip? Marriott’s Grand Chateau is half a block away from the strip. It’s literally a 30 second walk from Las Vegas Boulevard.

What off-strip hotel is the cheapest? Most of the hotels listed above offer great prices, but Tuscany is my favorite budget option. You can usually get a room for under $80 a night, both during the week and on the weekend.

All of these hotels are solid options and are rated between 3-5 stars. If you want to compare prices, I wrote another post with the nightly rates for these hotels here.

Should I Stay On The Strip or Off The Strip?

As I mentioned earlier, your budget is the biggest determining factor when deciding where to stay. If you’re really on a tight budget, off-strip hotels maybe the way to go. But you can also save money in other areas and still stay on the strip.

Staying off-strip is also a good idea if you plan on doing a lot of gambling. Your chances of winning are higher at the off-strip properties.

You should stay ON THE STRIP if it’s you’re first time going to Vegas. You’ll be spending most of your time on the strip anyways, so there’s no point in commuting back and forth everyday. The off-strip hotels may seem close on a map, but realistically most of them are beyond walking distance.

If you plan on going out to nightclubs and pool parties I also recommend you stay on the strip. It will save you a ton of time when you go back to your room and change. You really don’t want to waste time commuting while on vacation.

Is it safe to walk around Las Vegas at night? If you stay within a few blocks of the strip, Las Vegas is very safe. The safest areas are Las Vegas Boulevard (the strip) and Fremont Street (downtown Las Vegas). Generally, I would avoid wondering north of Encore and south of Mandalay Bay.