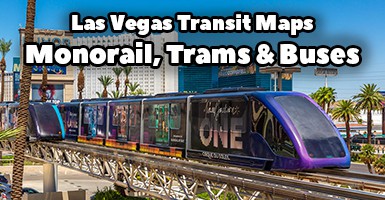 There are several ways to get around Las Vegas outside of rental cars and ridesharing apps. These alternative modes of transportation are cheaper, and often faster than driving.

There are three main public transportation options in Las Vegas: Monorails, Trams and Buses. Depending on where you’re going, you may be better off choosing one of these options over another. In this post, I’ll help you choose which mode of transportation is best for your needs. I’ll also cover pricing, schedules and route maps (which you can download and print for free below). By the end of this post, you’ll be navigating Las Vegas like a pro.

The monorail runs on the east side of the Las Vegas Strip from the MGM Grand (on the south end) to Sahara Las Vegas (north end). The train runs everyday from 7 am until midnight or 3 am, depending on the day. New trains arrive every 4-8 minutes, and make stops at 7 stations:

You can see where each station is located on the map below. (You can download and print out the map take with you.)

Tickets for the monorail are available for purchase at vending machines found at each of the stations. Here is the pricing:

The trams are located on the west side of the Las Vegas Strip, opposite of the monorail. And unlike the monorail, these trams are completely free. However the trams run on 3 separate circuits, so you won’ be able to ride them the entire length of the Strip. These are the tram circuits and their stops:

You can see the tram circuits on the map below. The Aria Express Tram is black, the Mandalay Bay Tram is red and the Mirage-Treasusre Island Tram is green. You can also see all the monorail stops in blue.

(The map is interactive, so you can zoom in to get a closer look.)

Aria Express Tram: This tram only has 3 stops, but it connects to several nearby hotels including: Park MGM, Bellagio, Vdara, Aria, Cosmopolitan and Shops at Crystals. New trams arrive about every 15 minutes, and the entire ride is 6 minutes end to end. It operates everyday from 8 am – 4 am.

Mandalay Bay Tram: The Mandalay Bay Tram only makes stops at the south end of the Strip at Mandalay Bay, Excalibur and Luxor. It runs from 9 am – 12:30 am, Sunday – Wednesday. Thursday – Saturday it runs 9 am – 2:30 am. The entire circuit takes about 5-7 minutes to complete. New trams arrive about every 5 minutes.

Mirage-Treasure Island Tram: This tram only goes back and forth between Treasure Island and The Mirage. The ride is less than 5 minutes long, and new trams arrive about every 10-15 minutes. It operates everyday from 9 am – 1 am (it’s open until 3 am on Friday and Saturday).

It’s nice that the trams are free. However, it can be a hassle if you want to travel longer distances. Hopping off one tram and walking to the next one isn’t exactly fast. This is less of an issue if you want to take your time exploring the casinos, but just know that these trams aren’t ideal over longer distances. Personally, I only use them to go one or two casinos over.

The final, and most flexible, Las Vegas transit option is the buses. There are a few bus tours in Las Vegas that you can purchase tickets for, but I’m not going to cover those here. The buses that I’m referring to are the ones operated by the city’s Regional Transport Commission.

As a visitor, there are only three routes that you’re likely end up using: the Deuce, the SDX and the Downtown Loop. All three buses are super cheap, making them ideal for anyone on a tight budget. I’ll cover everything you need to know about these buses below.

Deuce on the Strip

As the name suggest, the Deuce mostly runs on the Las Vegas Strip, stopping at nearly a dozen hotels and casinos. This is the fastest way to get up and down the Strip (except for driving) if you aren’t near a monorail station. If you hopped the Deuce at Mandalay Bay and rode it up to the Wynn, it would take about 20 minutes.

It’s also extremely cheap, costing only $8 for a 24-Hour pass. The bus runs 24 hours a day, and you can purchase tickets at vending machines at many of the stops. Here is the full pricing table:

The bus runs frequently, with new buses arriving about every 15-20 minutes. You can see all of the stops on the map below (click on the map for a larger view).

The Deuce has additional stops near McCarran Airport, but only in the morning (12 am – 9 am). It also runs all the way up to Fremont Street in Downtown Las Vegas. Although, I don’t recommend that you take the Deuce all the way up to Fremont Street. The ride will take between 30-50 minutes, depending on where you hopped on. If you want a fast way to get downtown, I recommend you take the SDX…

The Strip & Downtown Express (SDX) is the fastest way to get to Downtown Las Vegas. This bus has almost the same route as the Deuce, but with less stops. In fact, the SDX only has 6 stops directly on the Strip. So, if you want to hop on the SDX from the Strip, you’ll need to do so at one of the following locations:

Depending on where you got on, the trip downtown (specifically the Fremont Street Experience stop) will take between 20-30 minutes, which is half the time as the Deuce. When heading back to the Strip, the SDX makes the following stops:

Similar to the Deuce, you can buy tickets at vending machines, or on the bus itself (you need exact change if you buy a ticket on the bus). The prices are also exactly the same:

Unlike the Deuce, the SDX does not run 24 hours a day (it only operates 9 am to midnight). So if you need to head to (or from) Fremont Street in the middle of the night, you’ll still have to use the Deuce.

The Downtown Loop is a free shuttle that runs exclusively in Downtown Las Vegas. It has only has 8 stops:

I added all the stops to the map below. Like the tram map, this map is interactive. You can zoom in to get a better view.

New buses arrive at each stop about every 20 minutes. Here are the hours of operation of the Downtown Loop:

Most of the attractions in Downtown Las Vegas are clustered together on Fremont Street, so you won’t need to use this bus too much. But a few things, like the Las Vegas North Premium Outlets or Pawn Plaza (from the TV show Pawn Stars), are a bit further away. To visit those attractions, the Downtown Loop comes in handy.

Since everything is congested in one area, Downtown Las Vegas can be confusing navigate. To find your way around Fremont Street, I recommend you use this map. Having a map will really come in hand, especially if it’s your first time visiting.

Best Way To Get Around? (Monorail, Tram or Bus)

If you’re staying at a hotel that has a monorail station nearby, that is definitely going to be the fastest option. The monorail is usually faster than driving a car. However, if you’re on the opposite side of the Strip you’ll either want to take the trams (for short distances) or the Deuce Bus (if you’re going all the way up the Strip).

If you’re heading downtown, I recommend you take the Strip & Downtown Express (SDX). Just keep in mind that it only runs from 9 am to midnight. If you need go downtown (or get back from downtown) after midnight, the Deuce runs 24 hours a day.