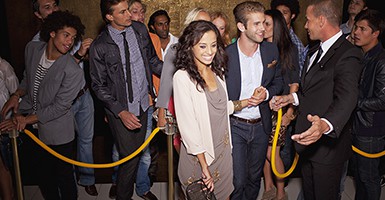 As someone who goes out frequently, I always see people who struggle to get inside the club. But getting into top nightclubs doesn’t have to be difficult. You just have to be aware of a few specific things that bouncers look for when deciding who gets into the club.

Nightclub bouncers decide who gets into the venue based on several factors-like attitude, spending budget, guy-to-girl ratio and appearance. Generally, bouncers are looking for patrons that are willing to spend money and won’t be rowdy once inside of the club.

Here are some things that nightclub bouncers look for when deciding who to let in:

Not all club’s have the same criteria for entry. For example, not all clubs implement a girl-to-guy ratio. There are also venues that have additional criteria, like guest lists. In this post, I’ll cover how bouncers and doormen make decisions differently based on the type of venue and the city it’s located in.

When trying to figure out exactly how bouncers (or doormen) decide who to let in, you first need to identify what type of club you’re at. Here are a few of the different nightlife venues that you’ll run into:

“Exclusive” nightclubs are venues with tough door policies, meaning it’s hard to get in. You really only find clubs like this in big cities like New York, Los Angeles and Miami (although they are found in other cities too).

These clubs usually are very small, and make most of their money off of bottle service tables. Bouncers are very careful of who they let in because they’re looking to preserve the image of the club.

The clubs wants to maintain a reputation of having a lot of attractive women, and very few men. They do this so that big spenders, who are looking to impress women, are more likely to visit the club.

Anyone who does not meet this demographic is typically kept out. Only people who have a high probability of getting along with the high-end clientele are allowed to enter. People who don’t look the part, or are perceived as potential trouble makers, are purposely kept out because they may upset the big spenders (if you spend $3,000 on bottle service, you expect a high-end environment).

If you aren’t spending money on bottle service, you still have a chance to get in if you do at least one of the following:

In addition to meeting the criteria listed above, you must also follow the dress code. (If you’re not sure what the dress code is, just look at what the people who are getting into the club are wearing).

Most groups of attractive women will be able to get in for free without a problem, but you increase your chances by hitting up a club promoter. These clubs aim to have a greater ratio of women than men. Bouncers take this into account when deciding who gets in.

Men who show up to the club with a bunch of women can sometimes get in for free, but this doesn’t work at the best clubs. As a man, your best bet is spending money or developing a relationship with the club staff.

Regulars and friends of the door staff get priority at these club, and often get in for free. Some exclusive clubs will also let you in if you pay a cover charge (usually $30-$50). If there is no cover charge you could try to tip the doorman, but only as a last resort.

Mega-clubs are top nightclubs that hold thousands of guests each night. They have celebrity DJs playing on most nights, and are found in cities like Miami and Las Vegas.

What differentiates mega-clubs from the exclusive clubs are their size. Exclusive clubs may hold 200 guests a night, but a mega-club can hold 4,000. In addition, mega-clubs generally do not have a bouncer or doorman in front deciding who gets in.

These clubs sell bottle service tables and tickets. As long as you purchased a ticket or a table (and you follow the dress code), then you’re guaranteed to get into the club with no hassle.

Most mega-clubs also have promoters who can bring in guests for free on their guest lists. Depending on the city, both men and women can get in free on the guest list (I’ll talk more about this in a minute).

To get into mega-clubs, you should:

Common nightclubs are just normal clubs, with strait forward door policies. Most clubs that aren’t in major metropolitan areas fall into this category, along with most 18+ nightclubs.

If you’re decently dressed and not rude to the bouncers, you’ll easily get into these clubs. Some clubs do have a $5-$20 cover charge. They do this to keep out potentially rowdy people who aren’t willing to spend $5 to get in. Drinks cost more than $5, so if you can’t afford the cover charge, then you probably can’t afford the drinks anyways.

Most people are going to get into these clubs with no problems, but here are some tips to ensure entry:

As long as you don’t give the doorman a reason to not let you in, you’ll be able to get into common nightclubs without a hitch. Just make sure that you have a valid ID, and don’t make a scene.

Lounges are a mix between a nightclub and a bar. They’re slightly more classy than a traditional bar, but not as chaotic as a nightclub.

Most lounges have an upscale-casual dress code that needs to be followed, but other than that they are easy to get into. There may be a small cover charge of $10-$20, but it’s rarely more expensive than that.

Bars on the other hand vary greatly with their dress codes. Some enforce a very basic collared shirt type of dress code, while others don’t have any requirements at all. Some bars will also have a small cover charge, but this is rare.

When figuring out how to get into nightclubs, the city you’re in matters too. For example, every nightclub in Las Vegas has a free guest list. If you’re in Vegas, you can disregard everything I have mentioned so far and just get into clubs for free by adding your name to an online list.

This only applies to clubs in Las Vegas, and it works for both men and women. (I wrote another post about the Las Vegas guest list here).

In other cities, like New York, many of the top clubs require minimum bar tabs. Instead of having a cover charge, the club will let you in under the condition that you open a bar tab (usually for a minimum of $100-$200).

Nightclubs in Los Angeles are completely different. They are largely based on how much money you spend and who you know. The point I’m trying to make is that every city operates a little bit differently.

The best way to find out how to get into the clubs in your area is to observe how other people are getting in. Going to the club early and talking to the bouncers can also teach you a lot about the club. Becoming friendly with the staff doesn’t hurt, no matter what city you’re in.

Can Bouncers Kick You Out For No Reason

Bouncers cannot physically kick you out of a club for no reason, but they can ask you to leave. If you aren’t compliant then the bouncers are allowed to call the police. Although they can’t use physical force, bouncers do have the right to respond with equal force if you attack them.

Bouncers also have the right to refuse entry into a venue. If you were denied entry and feel like you were singled out, I recommend speaking to the club owner or manager to work out a solution. Arguing with a bouncer will NEVER get you back into the club that night, and it may actually get you banned!

Last Minute Tips For Getting Into Nightclubs

To increase your chances of getting into a nightclub, it’s best to asses what type of club it is beforehand. Once you do that, here are some last minute tips ensure you get into the venue smoothly: