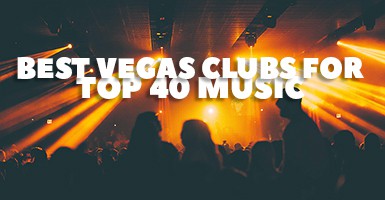 When picking the nightclub you want to attend, music selection is going be a major factor. All nightclubs in Las Vegas play a bit of Top 40 music, but they mostly play EDM or Hip Hop. There are only a handful of clubs where Top 40 is a major part of the set. After going out to Vegas nightclubs almost every night for the past year, I have found that there are a couple clubs that play the most Top 40.

Vegas nightclubs that play a lot of Top 40 music include:

Every Vegas nightclub is different, as some play a combination of EDM and Top 40 while others play Hip Hop and Top 40. Also, you may get more or less Top 40 depending on the DJ that’s playing that night. I’ll cover all the top clubs below, to help you pick the right one.

Chateau can be found under the Eiffel Tower, on the rooftop of the Paris Hotel. This club plays a good amount of Hip Hop, but the DJs also mix in a healthy dose of Top 40. You’ll recognize every song being played here making it super easy to sing along to your favorite songs.

The DJs here interact with the crowd a lot, probably more than any other Vegas nightclub. This makes a lot of sense because everyone is going to know the Top 40 songs. You can pretty much guess what songs are going to be played before they even get to the venue, but they also mix in some of the biggest hits from the past few years.

Chateau offers free entry to women who sign up for their guest list. It’s free and takes less than 2 minutes to sign up online. Men can also get free entry on the Chateau guest list, but only if they have an even ratio of women in their group (or more women than men). The club is open Thursday – Sunday.

Jewel is another club that plays a good amount of Hip Hop, but with some Top 40 mixed in. Jewel plays EDM music as well depending on the DJ, but I find the club to play much more Top 40 and Hip Hop. Jewel also has occasional live performances from artists like Tyga, that have songs on the Top 40 charts. So you’ll definitely get your fill of Top 40 here.

Apex Social Club is located on the rooftop of the Palms Hotel. Apex is honestly more of a high end lounge/ nightclub hybrid than a traditional nightclub, but it’s still a ton a fun. It has one of the best views in Las Vegas since it sits on top of the 55th floor and it has some of the best bottle service deals in Las Vegas, if your looking to treat yourself.

The club allows female guests free entry on the Apex guest list. Men must have an even ratio of women in order to get free entry. Bottle service here starts at $350 for 8 people, which is the lowest price you’ll see among Vegas clubs. To book bottle service you’ll need to connect with a VIP host that works at the club. If you’re looking for a VIP host contact us here, and we’ll put you in touch with one that works at Apex. The club is open a majority of the week which includes Thursday – Sunday.

Hakkasan is primarily known as one of Vegas’ best EDM nightclubs. But not too many people know that the 3rd floor of Hakkasan, also called the Ling Ling Lounge, plays strictly Hip Hop and Top 40 music. The main room takes care of the EDM so you won’t hear any played here. This room is part of Hakkasan, but operates as its own club.

The DJ in the Ling Ling Lounge switches back and forth between Top 40 and Hip Hop perfectly. This would be one of my favorite clubs if it where a standalone venue! The bottle service here is also cheaper than it is in the main EDM room, starting around $1,000 on some nights. So if your looking to get bottle service at one of Vegas’ premier nightclubs, this is a great place to do it.

Hakkasan does allow both men and women free entry on it’s guest list. Like Jewel there are no ratio requirements for the Hakkasan guest list. Hakkasan is open Thursday – Sunday night, but the Ling Ling Lounge is only open on the busier nights (busier meaning Friday and Saturday or when a big DJ is performing). You can find Hakkasan at the MGM Grand.

Marquee is another top tier Vegas nightclub that plays a good amount of Top 40. The music is an even mix of Hip Hop, Top 40 and EDM so you’ll get a little bit of everything here. Marquee also has live performances from artists like Travis Scott and DJ Mustard, who are resident DJs. Both artists have a ton of songs scattered throughout the Top 40 charts so you can bet that those will be played.

Women get free entry on the Marquee guest list, while men are required to have an even ratio of women in their group. Women on the guest list frequently get access to an open bar on Monday nights, so keep that in mind when choosing what club to attend. Marquee is open Monday, Friday and Saturday.

Tao is the sister club of Marquee, so the musical preference is very similar. You won’t get as many live performances from actually Top 40 artists, but make no mistake their music is played here. Expect a combination of Hip Hop, EDM and Top 40.

Similar to Marquee, women can get free entry on the Tao guest list. Men must have an even ratio of women in order to take advantage of the free entry. Tao is open Thursday – Saturday.

What are the best clubs for EDM music in Las Vegas? Both Omnia and XS Nightclub are excellent Vegas clubs for EDM music. XS is a half indoor, half outdoor nightclub with a pool. Resident DJs at XS include the Chainsmokers, Diplo, Kygo and DJ Snake. Omnia is mostly an indoor venue that features DJs like Calvin Harris, Steve Aoki, Martin Garrix and Zedd.