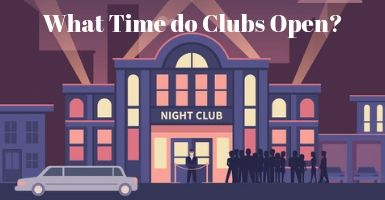 Although Las Vegas is known as a city that parties 24/7, the nightclubs aren’t open all day. As someone looking to party in Vegas it’s important to know what time these clubs actually open their doors.

When do Las Vegas Nightclubs open? Nightclubs generally open their doors at 10:30 pm. But depending on how busy the club is, guests can wait in line for anywhere between 15 minutes to an hour before being let in. How long you wait in line will also be determined by which line you are in: General Admission, Guest List or the Table Line.

The time you actually arrive at the club will be extremely important in ensuring that your night goes according to plan. Waiting in line for hours or getting inside too early and standing around, just isn’t fun. There is a lot to consider when making this decision including the venue, the day of the week you are going, and the method used to get into the club.

How Long After The Club Opens Should I Actually Get There?

When deciding the best time to actually arrive at the nightclub, the most important factor to take into account is, how busy the venue will be that night. As a general rule of thumb Friday’s and Saturday’s are going to be the most busy, so I would shoot to arrive at the club no later than 10:00 pm on those days.

You must also consider the headline DJ for that night. If its a big name DJ then the club is going to be packed regardless of the day of the week.

As far as tables and bottle service go, you will have priority and VIP treatment, so getting into the venue is not usually an issue. Although, there are some exceptions at specific clubs that are famous for long table lines. I’ll cover them in the table below.

General admission lines are surprising short in Las Vegas and move fast. So if you bought a ticket and it’s not the weekend or for a special event, waiting in line will not be an issue. You can show up at 11:00 pm and be just fine. There are a few nightclubs that get busy on certain days so check the table below to see what the best time to go is.

This table shows what time to arrive at specific venues depending on the day of the week. Weekends are not show because it is best to always arrive early on Friday and Saturday, preferable by 10:00 pm, as every club will be extremely busy.

*The Table/ Bottle Service line for Marquee and Omnia are more of a mosh pit than a line, so it’s a good move to get there early. Also Encore Beach Club has the longest table lines in Vegas, so definitely get there at 10:00 pm before the club even opens. I’ve waited in the table line at Encore Beach Club for upwards of 2 hours before, so do yourself the favor of being there on time.

What is The Best Way To Get Into Vegas Clubs?

I mentioned that there are 3 main ways to get into a nightclub on any given night, General Admission, Guest List, and Bottle Service. But how do you know which one is the best for you? Here are some important factors to consider when deciding how you are going to get into the club:

It is typically easier for a group of girls to get into the club than a group of guys. So if you have a group of all girls the guest list is probably your best bet. You may even be able to skip the line.

If you’re group has an even ratio of guys and girls then the guest list is also a good idea. But if your group is a majority guys, you may want to consider pooling together resources to purchase a table or buy tickets.

There a clubs like Hakkasan and Omnia that allow groups of guys to use the guest list without girls, but for most of the clubs that just won’t fly.

If you plan on going into the club with 6+ people, then you should strongly consider a table. This will keep your group together and give you your own real estate within the club to party together without bumping into strangers and getting drinks spilled on you. You can also invite any friends you make to party with you at your exclusive VIP table.

What to do Before The Club Opens?

There is a lot to do in Vegas, but occasionally there will be a break in the action. There is a 4 to 5 hour gap between when the dayclubs close and when the nightclubs open. There are a few things you can do to maximize your time in Vegas.

Touristy activities can be fun to do but if your just in Vegas to party and have a good time then they will likely take up too much time.

In between dayclub and nightclub sessions I recommend that you eat a solid meal. Vegas has plenty of mouthwatering restaurants to chose from and many of them are located in the casinos, directly next to the nightclubs. This will give you a chance to eat an amazing meal then walk a couple hundred feet over to your club of choice. Also, the food will help prevent you from getting too drunk or hungover the next day.

If you still find yourself with a lot of time on your hands, then pre-gaming at the lobby bars before you go into the club is not a bad option. Every casino has multiple bars right outside the nightclubs, many of them world class.

Pro-tip: The drinks at the lobby bars are usually much cheaper than inside the club, it never hurts to get the party started before you go in.

On the off chance that you didn’t go to a pool party during the day, you may find you have a lot of time on your hands before the nightclubs open. This is a great opportunity to go to a strip club. They are open 24 hours but are less busy during the day.

Most strip clubs also offer free limo and drink packages. Lady’s are also welcome in strip clubs (if you have never been it’s surprisingly fun), but the equivalent for girls are Magic Mike or Chip and Dale shows.

The final variable to take into account when planning out your night is travel time. Traffic is always horrible on the strip and all the hotels look deceptively close. If you are going to a club that is not in your hotel plan at least 30 minutes into your travel time.

What time do Vegas nightclubs close? Vegas nightclubs normally close their doors at 4:00 am. Although depending on how busy the club was that night, it may be close to 4:30 am before security forces you to finish up your drinks and leave. After hours clubs are open until about 7 or 8 in the morning.

What time do most bars close in Las Vegas? The bars located on the Las Vegas Strip are open 24 hours day. Every casino will have at least one bar open at all times. The more traditional bars located off of the strip vary their closing times. Bars on Fremont Street and in Downtown Las Vegas tend to close around 3 or 4:00 am.

What time do clubs get busy? Nightclubs in Las Vegas start to get really busy around midnight. On the weekends clubs tend to get busier much earlier in the night, usually around 11:00 pm. To avoid waiting in long lines at popular nightclubs, plan to arrive early.

What time do dayclubs and pool parties open? Vegas pool parties open their doors at 11:00 am. Dayclubs are typically some of the busiest clubs in Las Vegas and tend to sell out fast. Always plan to arrive early in order to minimize the time you spend in line.